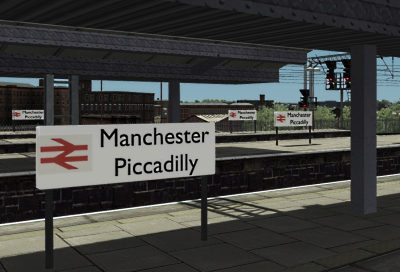 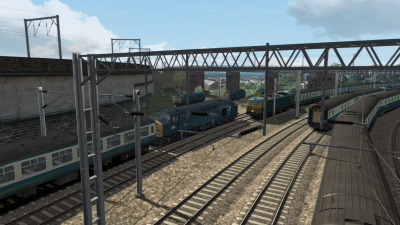 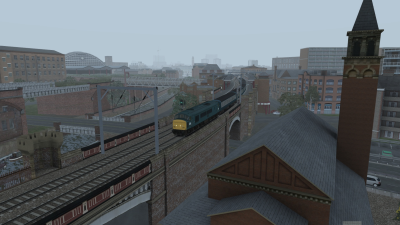 You will be driving a Class 45 hauled express from Crewe to Liverpool Lime Street on an overcast day calling at Manchester Piccadilly, Oxford Road and Warrington Central...the scenario starts as you are held at a red signal about a mile before Manchester Piccadilly.
Please note that there is a faulty signal just before you reach Warrington Central ( this is a legacy issue from the original version of the Route, have tried to fix it but have not been successful ) - you should approach the signal at low speed and press Tab until you are given permission to proceed
Payware required:
DTG Class 45            Class 31             Armstrong Powerhouse Class 40 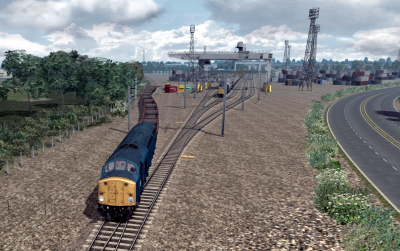 You will drive a Class 40 light engine from Edge Hill MPD to Garston Depot Aggregates , at Garston Freightliner Depot, to collect some empty ballast wagons from which ballast had been unloaded for track maintenance the previous night. Once coupled to the ballast wagons you will drive to Edge Hill Track Panel siding where the scenario will end.
You will need to change ends on the Class 40 a couple of times during the scenario, this is a more complicated process than on other locos....on-screen instructions are included, please follow them carefully otherwise the loco will not move.
If you arrive at the final destination on or before 10:45 then you have driven well, any later than that then have another try.....it may take a couple of attempts if it is the first time that you have changed ends in this loco. Please ensure that you obey all speed limits even if they may seem rather slow in places.
Payware required:
DTG Class 45         RSC BR Class 101             Class 31             AP/Railright Class 40 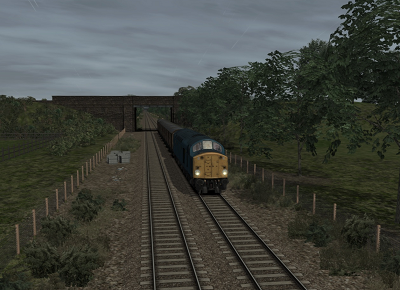 You will first drive light engine from Edge Hill MPD to Edge Hill Track Panel Siding where you will couple up to a rake of BR Vans, you will then deliver the vans to Warrington Central Goods yard before stabling the Class 40 there awaiting it's next assignment. It is a dull day with occasional showers.
​There are a few faulty signals to deal with unfortunately, I have also listed them in the briefing so that they can be referred to during the scenario if you are uncertain whether or not to obey a particular signal - you should Tab through the first red signal after leaving the MPD, ignore the red signal approaching Exhibition Junction and Tab through the red signal at the bottom of the ramp approaching Wavertree Junction.
Important: Read the enclosed .txt file before starting the scenario.
​
Payware required:
Railright Class 40          RSC Class 31 BR 101 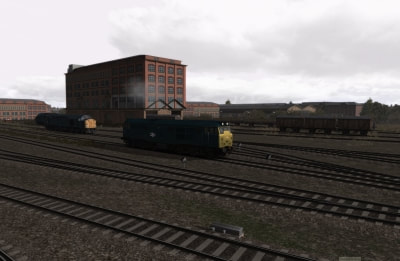 Class 31 Ballast Wagons to Stockport      41 min          by Andy Freeman
​
The scenario begins on a rather gloomy Autumn morning in Warrington Central Goods Yard - you will first collect some loaded ballast wagons, which were dropped off the previous day, which are due to be taken to Stockport to be used in track maintenance later that day....on the way you will drop off two wagons at Macnhester United Football Ground as maintenance is also scheduled there.
​The scenario will end at Manchester Piccadilly where a new driver, with required route familiarity, will take the train onwards to Stockport.
NB. Due to faulty signals in Warrington Central Goods Yard you may need to uncheck "Exit on SPAD" in TS2016 settings.
Payware Required:
RSC BR Class 101, Class 31,        Railwright Class 40 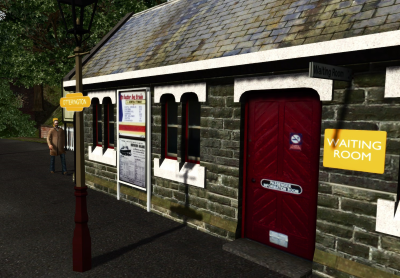 Additional Assets Pack for ECML: Echoes of Steam
​
Unpack the zip file to a suitable location. Copy and paste (or drop) the Assets folder into your "Railworks" folder. Say yes to any request to overwrite files (do not worry, any original is stored safely).
​The keithmross folder contains new sets of station nameboards, totems and general signs, all based upon those used in "The Port Road"(a required DLC for this route extension), but with the colour of the NE region of BR.

To enable all the above to function, you need to run the batch file (Echoes_reskins.bat) which will now be found in the Assets folder (just double left click on it).

Remember to Clear the Cache through the Menu "Settings/Tools" in game, and all the new signs will show in the Route.