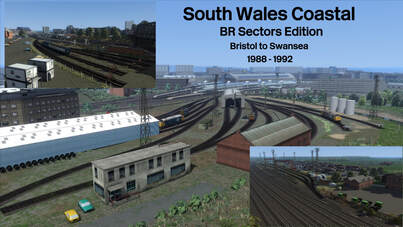 South Wales Coastal - BR Sectors Edition
Reworking of DTG's South Wales Coastal route depicting the period of 1988 to 1992 (broadly speaking) and arguably the end of an era for rail freight across the region. This was very much the dog-end of "King Coal" as by the late-Nineties all deep mines within the South Wales Coalfield had closed bar one (Tower Colliery) and with them the yards and minerals-only lines that served them. This was also a transitory time for passenger services too with second-generation DMU's being introduced (150's, 155's, 158's) leading to the withdrawl of first-generation units (Classes 101, 116, 120, 121) by late 1992, although Arriva would later use a "Bubblecar" on the Cardiff Bay Shuttle service.
For this project I have used "British Rail Track Diagrams: 3 Western Region" published in early 1989. I have done little to lineside buildings that may not have been there in this period except for removing obviously anachronistic structures such as The Millennium Stadium, Cardiff City Stadium (Ninian Park reinstated) and Swansea's Liberty Stadium. Severn Tunnel Junction Yards closed in October 1987 and would have been undergoing recovery for months afterward but I have left the lineside largely as it is in the stock DTG route rather than try to depict a recently closed yard. A similar story with Margam Yard, although this was technically open into 1988 I have depicted it as per the 1989 track plan. I have attempted to model the former Ebbw Junction TMD as although it had closed at the end of 1983 and track largely lifted by 1985, at this time part of the site was used as a CE depot.
Bristol Parkway and Newport stations have been rebuilt to their period appearance using stock assets as I have no way of creating custom 3D models.
Additions
Bristol Bath Road TMD Bristol Pylle Hill Motorail Terminal Bristol East Depot expanded Bristol Lawrence Road Sidings
Bristol Coal Concentration Depot, Filton Filton Junction Station Llanwern Iron Ore & Coal unloading lines
Newport Godfrey Road stabling point Maesglas New Sidings, Newport Pengam FLT, Cardiff Cardiff Riverside Parcels
Cardiff Canton Freight Sidings Grangetown Station Llantrisant Yard Llanharan Opencast sidings
Margam LIP Margam Moors Yard Swansea Maliphant Sidings